The great migration is the movement of huge numbers of the Serengeti's wildebeest. It is one of the most remarkable wildlife events on the planet and it is often referred to as “the Greatest Show on Earth”. The wildebeests are accompanied by large numbers of zebra, and smaller numbers of Grant's gazelle, Thompson's gazelle, eland and impala. There are approximately 1.5 million wildebeest, 400, 000 zebra, and 200, 000 gazelles moving across the Serengeti National Park in Tanzania and the Masai Mara Reserve in Kenya.

They move in a 12 month pattern which is very predictable. They migrate all through the year, continuously in search of fresh grazing and water. The precise timing of the Serengeti wildebeest migration is entirely dependent upon the rainfall patterns each year 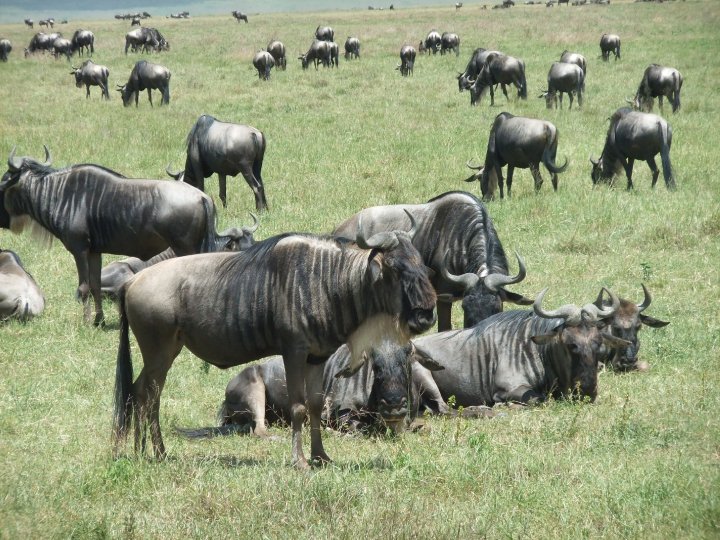 When most people go on safari in Tanzania, they usually imagine one animal; the  lion. Many call them the King of Beasts due to their tremendous power, size, agility  and hunting expertise. Lions are on most tourists’ bucket list of animals they would  love to see, and Tanzania is the best place in Africa to see these magnificent  creatures.

A leopard possesses a truly mysterious aura. Also known as the “Silent  Hunter”, the leopard is the most adaptable of the large predators and may still  be found in close proximity to man, even, sometimes, on the outskirts of large  cities. It is able to survive in just about any environment, being at home in  forest, savannah, desert, or mountain top.

The largest land mammal and perhaps is Tanzania’s most captivating creature is  the African Elephant. These animals are beautiful, peaceful herbivores; however  they can be deadly if they are provoked. Their massive size and strength means  they have no natural predators, and they usually roam the lands in groups.

The rhinoceros is characterized by its large size in addition to its herbivorous diet.  An adult rhino weighs from 1100 to 3000 kg (2425 to 6614lbs), where males are  larger than females. When compared to other types of rhinoceros, the black rhino is  considered to be the most aggressive. Despite their immense bulk, they can charge  at a speed of 50km per hour at a bystander. A rhino is more than capable of  causing serious damage to a vehicle, however they have very poor vision, and they  rarely would attack for no reason. Ultimately they prefer to snooze in the cool  shade, or graze on the grass.

An unforgettable sight is a large herd of buffalo, which are closely related  to the domestic cow. When you approach buffalo, you will see their  beautiful horns, their fringed ears, and often their heads will raise and  their noses will twitch in search of danger. Buffalo are completely  dependent upon surface water, and are widespread and common in savannah, woodland and forest environments. Not surprisingly, however,  they provide good meat and few now survive beyond the borders of wildlife  reserves and other protected areas. 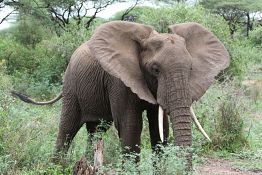 There is an abundance of local history and colour to be found in all areas of Tanzania, with approximately 127 different ethnic groups and more than 130 different languages. Every single person in Tanzania has a beautiful story and history to share. Every tribe has different traditions and customs that may be expressed in everything from elaborate ceremonial attire to energetic dance rhythms, and community spirit. The largest tribe in Tanzania is Sukuma, and there are two ethnic groups in particular that stand out and are very distinct, as they have not surrendered against the modern age of assimilation; the Maasai and the Wahadzabe people.